As the Yo-Yo Bounces

In the past few, oh, maybe 6 or 7 years, I've developed a certain notoriety in my community. I'm never sure whether to think of it as a good or bad thing. See, I'm obsessed with food. Yes, I'm obsessed in the sense of always looking for something good to eat, but also obsessed in the sense of making absolutely sure that I'm making the right food choices for my health and that of my kids. I wasn't raised like that at all. This isn't some sort of fancy I have to occupy my time. No, the reason is because I teeter on the brink of health and disease.

I'm a canary in this coal-mine world. I've had symptoms of allergy, arthritis, cancer, chronic fatigue, depression, diabetes, hypertension and hypothyroidism, and that's just A through H. Every time I've gone to the doctor to get things under control, throw in the towel, get a prescription, my lab results have been normal. There's a certain sense of relief that comes with normal lab results, but also a growing frustration as I struggle with those symptoms. It's a frustration that keeps me reading, gathering knowledge, and questioning everything.

How did I get here? I ask myself this question all the time.

When my mother was growing up, she was regularly fed things like liver and cod liver oil. She grew up in poverty (the daughter of a painter and a bookbinder), but from what she has told me, it sounds like her parents did an exceptional job feeding her. Perhaps it was the way most baby boomers were fed; her parents were older, born near the turn of the 20th century, before vegetable oils and hydrogenation became commonplace. As an adopted child, she was fed formula made with PET evaporated milk. In fact, back in 2003 when Erick's mom gave me my copy of Sally Fallon's Nourishing Traditions, my mother marveled that there was a published cookbook containing real food.

Due to a blizzard in Brooklyn, my dad was born in an uncomplicated fashion at home, without a medical professional in attendance. He was the youngest of four children and grew up in a very small town in upstate New York. His mother shopped at the local co-op, and when they could afford it, they had raw milk from the local dairy. He also was not particularly privileged; his father was a brick mason, and his mother was a nurse.

Neither one of my parents needed orthodontic intervention, and grew up with perfectly straight teeth. Neither needed glasses until they were in college. Their parents did not need these things, either.

My mother, however, was not allowed in the kitchen, so she did not know how to cook. A couple years before having me (her first child), she was diagnosed with Graves' Disease (which is ironic because Graves was her maiden name) -- autoimmune hyperthyroidism. She took antithyroid medicine for some period of time before I was conceived.

She had an uncomplicated pregnancy. When the time came, she had a four-day long prodromal labor.  She was turned away from the hospital multiple times before she was admitted. After being in labor for so long, she was given narcotics, and I was delivered by forceps. Unlike many babies in the 1970's, I was fortunate to be breastfed for the first year of my life. She claims that I immediately slept through the night. Maybe that's true (uh, narcotics!), but my parents are deep sleepers, so I doubt the reality of that claim. 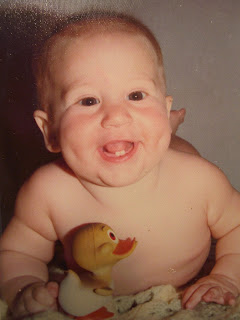 There were a lot of Cheerios in my infancy, starting around six months, and continuing well through high school. We were purists and did not put sugar on them. My mom didn't "do" baby food. She had a baby food grinder and took it with her everywhere. To all the restaurants, I mean. She didn't cook -- so that meant we ate out several times per week. McDonald's was a treat; typically we went to sit-down restaurants. I had favorites at each restaurant and never deviated in my order. Paisan's (an Italian restaurant on Colfax) was the wide spaghetti with meatballs. Village Inn was the barbecue, bacon and cheese chicken sandwich with fries for lunch or dinner, french toast and hot cocoa for breakfast. La Bola was the chicken chimichanga. There was a Domino's Pizza around the corner from our house, so we had plenty pizza.

At home, our fare was pretty simple. I remember really liking braunschweiger sandwiches on white bread with mayonnaise.  I would not eat whole wheat bread. No way. My mom always bought a loaf of Roman Meal bread for herself -- that's what she had eaten growing up. Another regular meal was tuna fish tacos, which was simply canned tuna with melted cheddar cheese made in the microwave. My mom made spaghetti with meat sauce quite often, which I detested (those noodles were terrible compared to that freshly-made pasta at Paisan's). A favorite meal was Fettucine Alfredo, made from a mix. My parents would kick it up a notch by adding shrimp (which my sister would hoard before passing the bowl to the next person at the table). We ate very little in terms of vegetables. Dad hated them.

I loved to "cook" as a child. When I say "cook" I really mean "bake." I was about seven or eight years old when I made my way around the kitchen. My favorite thing to make was a brownie recipe out of my mother's USDA cookbook. It called for shortening. We went through that stuff like gangbusters, because I made those brownies all the time. Maybe once a week.

I remember feeling pretty sad for my friends, because their parents seemed overly concerned with making them eat "healthy food." I remember walking to the bus stop with a friend who had to pack her own lunch (she was one of three kids at the time), and her mom had strict rules that she have a fruit or vegetable in her lunch box. I don't remember any rules like that for me -- and most of the time I did not pack a lunch, unless Spooky Spaghetti was on the menu (I swear one time mine had a maggot in it). I liked many of the school lunches, and I particularly liked the chocolate milk (If you don't want your milk, I'll drink it for you).

We didn't have candy around the house. And we very rarely had pre-made cookies or desserts in the house. The only sugary cereal we ever had were Golden Grahams, and those were an occasional treat. There was no alcohol, either, and my parents, at that time, did not drink. They were teetotalers; their fathers had both been alcoholics.

We didn't play outside much; I grew up in a house with a small yard near a busy one-way street, surrounded by rentals. We watched a lot of television. Many of my friends' television time was limited.

I was in ballet class until I was about eight years old. It was not too long before I noticed I looked different than the other girls. I remember the dance teacher complaining that I would not suck in my "tummy."

When my teeth came in, I was missing a central lower incisor.  I never did get lower wisdom teeth.

I sucked my thumb until I was eight, so we always blamed my giant overbite on that.

I was the first girl to get breasts in the fifth grade. I remember being singled out during P.E. that year, being told that I was overweight. I probably went home and made a pan of brownies after school that day.

Genetics, my arse.
Posted by Amy Lewark at 8:23 PM