I was in charge of my own destiny

In junior high/middle school, I became no better at packing my lunch. I think, perhaps, if my parents bought Lunchables I would "pack a lunch." No, what I preferred to boost my brainpower in the seventh and eighth grades was a trip to the so-called "Snack Cart."

This rolling beauty carried delicious salty, fried, crispy things, and chewy mouth-watering sweet things. Maybe soda pop, too. I can't remember. So, my lunch was typically Doritos and a Coke.

I started out the day with cereal pretty much every morning.

I hated the locker room and the mandatory shower. I hated any sport we had to play with the boys.  I pretty much only liked tennis. Actually, I loved tennis.

I enrolled for a couple of years through the parks and recreation department, but for both years, the tournament fell during the days my parents chose to take our summer vacation. So, even though I ended up being seeded pretty high, I never got to see how I would have done.

In eighth grade, I had a depressive episode for which I got to spend hours in counseling with the school's social worker.

High school didn't get much better. My parents started giving me a lunch allowance regularly. We had an open campus, so once a week I would cross the street to the Deli and get a delicious pastrami sandwich on rye with swiss cheese, tomatoes, mayo and mustard. It was expensive, so I could only afford to get it once a week. The other days, my typical lunch fare was a Snickers bar and a Coke.

I participated in three sports my freshman year - softball, swimming and tennis. I was terrible at softball and swimming (my aerodynamics continued to worsen after the fifth grade), and was pretty good at tennis, but I injured my knee, and as it turned out, I already had arthritis in my knee. So, I shifted to some other extracurricular activities - Model United Nations, Drama Club, Math, Engineering and Science Association, Odyssey of the Mind (OM)... I can't remember them all. Anyway, I became obsessed with OM, such that I would skip lunch entirely many days of the week, just to go work on the OM project.

I would come home at the end of the school day with terrible headaches. Many times my mom was there when I arrived, as she would get home from her job elsewhere in the school district around the same time my extracurricular activities ended. I was always in a foul mood. I remember her saying, "Well, did you eat anything today?" And then she would say, "Well, have some toast!"

And so, I began the habit of coming home and having four or six slices of toast, topped with margarine and then sprinkled with cinnamon and sugar.  Sometimes (okay, a lot of the time), we were out of the cinnamon in the shaker we would make up, so I would just use plain sugar and margarine on my toast.

We were very regular church-goers. This didn't help matters -- I went almost regularly to the Winchell's near church with my friends between services, and mainlined fake lemonade (that stuff has never seen or heard of a lemon in its life) and sandwich cookies pretty much every time I stepped through those beautiful doors, at least twice a week.

In my sophomore year, a girl in my dance class (my choice for fulfilling the P.E. requirement) asked me if I was pregnant. I wasn't obese; I wore a size 10 or so at the time, and I weighed about 155 pounds.

By the time I left for college, my taste in food was pretty much cemented. I did drink a lot of milk -- we went through several gallons a week, and I drank most of it. But otherwise, I was pretty messed up. I already had arthritis, regular headaches, hypoglycemia... I had a prescription for an antihistamine in case I came down with a mysterious allergic reaction (I had a reaction to strawberries that never re-occurred, and Benadryl only made it worse). And, I had another few visits to a psychologist, this time for certain depression.

In some ways, my diet in college was slightly better. I went to school in New Orleans, and our cafeteria had jambalaya, red beans and rice, and gumbo every week. However, I stopped drinking milk with meals, as the milk in the dispenser was usually soured. Never having developed a taste for water as a child, I switched to Crystal Light. Pretty soon, even though I was eating well, I was having headaches daily, and they started right after lunch. So this time, I knew I wasn't getting headaches because of starvation or low blood sugar.

Fortunately, because by this time I had chosen my major (psychology with an emphasis on physiological psychology), during a trip to the library to do research for my physiological psych class, Erick ran across a book entitled Aspartame (NutraSweet):  Is it Safe?, which we read together. There were numerous references to aspartame and headache in the book. We immediately discontinued our consumption of Crystal Light and all aspartame, and within a day, my headaches ceased.

I wish I could say that was a turning point for me, and perhaps in some small way it was. It was the very first time I recognized that a food I ate could affect how I felt. For the rest of my freshman year, I continued using the meal plan, so I was still eating lots of "sneggs" (our shortened name for "It'snoteggs" after bad experiences on a cross-country trip with "free" continental breakfasts) topped with fake maple syrup for breakfast, and soft serve ice cream (hide your kids, hide your wife!) when the machine was working.

Due to the expense of the meal plan, Erick and I decided to "cook" for ourselves (think: bags of bagels, freeze-dried coffee, pizza, and lots of Zatarain's Jambalaya). Don't worry; I still drank lots of milk. Only my  boyfriend-soon-fiance' was rightly concerned about my food choices and that I might gain weight, so we switched to skim milk. Then I really did gain weight.

Hmm. Another depressive episode during my last year. Not much of a surprise, really.

I remember walking down the main road on campus, and having some guys yell out of their car window that I was a fat cow. I think I was a size 14 at that time. But definitely not the size of most of the other girls on campus.

Erick and I got married shortly after graduation, and we moved to the midwest where we began our graduate study. We actually had our very own kitchen for the first time, so we cooked pretty nourishing food for ourselves, though we did rely heavily on a low-fat Cajun cookbook. When we weren't sitting in lecture, teaching, grading papers, or doing research, we were either fishing, cooking, quilting (well, I was -- he played video games), hanging out with our rabbits, or watching the Food Network. I began to bake a lot. Each week, I would make brownies, a chocolate sheet cake, and lemon bars, and I would eat them mostly myself. 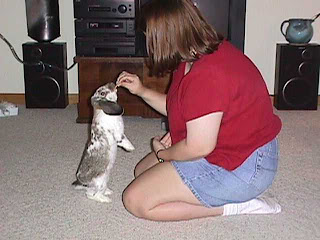 After three years, I had gained 60 pounds. I didn't really realize it had happened, because I wore leggings and long sweaters a lot in those days (mid-1990's). I don't think I even owned a pair of jeans. Ironically, I was pretty happy. At one point, I did try taking some St. John's Wort, and decided I didn't like it because on the second day I jammed my toe badly, and kind of laughed about it, because I didn't care. In retrospect, if I had just left my apartment and gone walking more often, I probably wouldn't have even felt like trying the St. John's Wort.

When we left graduate school and the midwest, we moved to Southern California and tried to get pregnant. I remember trying for about eight months unsuccessfully. I ended up visiting the doctor because I was having 90-day long cycles. I was told that my excessive weight had caused an abnormal amount of fat buildup on my ovaries, which was probably keeping me from ovulating. Something about hearing that I had fat buildup on my ovaries clicked in my head, and I realized I probably had it surrounding my heart, too.

I took a class through Kaiser Permanente, which espoused a low-fat diet. During that time, I began walking twice a week with a friend and followed a very strict low-fat diet (less than 25g fat per day and 1200 Kcal). My cycles returned to normal (still very heavy and long - 10 days or so, but every 30 or so days), I lost about 45 pounds, and I returned to a size 12.