I mentioned at the beginning of my earlier post that I get uncomfortable when people say their kids aren't self-starters, not brilliant, etc. Here's why.

I focused in that post on the things my kids do well. I actually had composed the story as a response to Peter Gray's Freedom to Learn blog solicitation for stories of how children had taught themselves to do things. Only I was a year late. So, I figured since I had worked so hard on it, I would, rather than pass it along to someone else to use, finally own something I did. It was most certainly not about being perfect.

I'm trying, since I felt so compelled as a child to do everything well, to focus on what they do well, and not worry so much about what they don't. It's one of the things with which I struggle in my day-to-day life. I don't really know who I am. I think of myself as a Jack-of-All-Trades, Ace-of-None.

I don't want my kids to feel like they have to do everything well. We all get enough of feeling like failures on a day-to-day basis without that pressure. We, as the old saying goes, are our own worst critics.

When is it that we had to become so good at everything?

I remember thinking when I was not even in middle school yet, that I was becoming a Renaissance Woman. What really happened is that I sort of learned a little about a lot, but never developed my talent in any one area to actually be successful in any of those areas. And, I never spent enough time working on one thing to feel self-confidence in any one department. And I never really developed a strong passion for anything. Mostly, I ended up confused.

We have our rough days around here, for sure. This is most likely not going to be a blog where I post glossy pictures of some awesome dinner I made, some incredible project I sewed, my new Martha Stewart-esque desk arrangement.

There is no perfect. I see traits in every single kid I meet which fill me with wonder and appreciation. Maybe it's because the kid decided to bring his used books to the park to sell. Maybe it's that a kid is so interested in cooking that he cooks for his family on occasion at a young age. Maybe she's really great at riding a bike. Maybe she's got encyclopedic knowledge of Greek Mythology. Maybe she's excellent at gymnastics. Maybe he's really outgoing and can strike up a conversation with anyone, or make friends at the park on any day of the year. Maybe he's really into numbers and is years ahead in mathematics. Maybe the kid has a really active imagination. Maybe the kid is resolute in her convictions.

I worry about my kids. I am a mom. I worry a lot. I could write an equally long blog post about my worries, but that would be a disservice to my kids. Maybe rather than concentrate on our kids not getting black belts, not becoming budding Monets, not becoming the next Wolfgang Puck, we should look at the full part of the glass. Chances are, someone else is.

We did the piano lesson thing. The piano teacher actually told us to "come back when you feel like making music a priority in your lives." Uh, SNAP! That happened during a time when both the kids were taking lessons, and neither wanted to practice without significant amounts of nagging on my part. We had a discussion about it, which went something like this: "You haven't been practicing the piano. The lessons are expensive. Are you tired of it?" Yes was the answer. "Can we take a break for a while?" 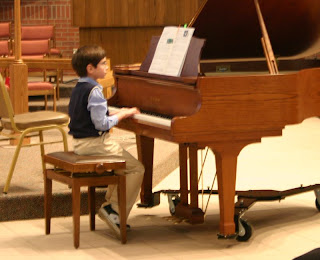 At that time, I was doing a lot of driving around doing things I felt obligated to do. I felt very tense a lot of the time. And tired. And I yelled a lot. I dreaded going to those piano lessons, feeling judged by the teacher, knowing that she knew that I could play the piano, and I wasn't sitting down with them and walking them through the lessons daily. Because that's not what they wanted. They wanted me to take them to the park and read them stories.

They were four and seven years old.

Why did I start them in piano so young?

Probably because I was five when I started.

Besides, George Gershwin didn't even have a piano until he was twelve years old.

We did the dance class thing. Lucy hated being told what to do. She still doesn't care for it much, but I've learned that she loves to help me, and she loves it when I use my good manners. She rewards me for my good manners.

We did the soccer thing, too. We don't have the energy for that. So many of my other friends do. Or they do Tae Kwon Do. Or Guildmasters. Or church. Or choir. Or art lessons. Or fencing. Or Irish Step Dancing. Or raising rabbits. Or designing costumes. Or robotics competitions. I can't even think of all the things they do.

Right now, we like to be. We like to read, hang out with our dogs, try to cook nourishing and hopefully edible meals, play on the computer, play board games and hang out with our friends, who do all sorts of amazing things we don't have the energy or passion to do.

It's not about being perfect, at all, because nobody is.
Posted by Amy Lewark at 11:25 AM