I met the enemy, and it was food (or so I thought)

We put our house up for sale on September 10, 2001, and moved back to Colorado a month later, even though our property did not sell for another month. In our apartment, I was the only other voice for his new ears during the day, so I read the first five Harry Potter novels out loud to Everett, while laying with him on the floor. 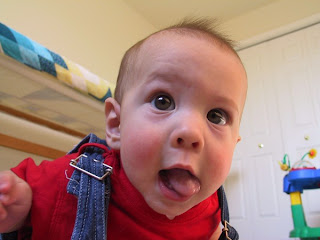 He somehow knew his father would be coming home around 5 o'clock, and would fuss in my arms until the front door cracked open, and a great smile would replace his consternation. Unless, of course, Erick had to use the restroom or have a drink of water before fully acknowledging this small person who had longed for him so intently. Mae, our bulldog, would jump around happily, performing what we called "The Rhino Dance" as her show of appreciation for Erick's return.

The week before Christmas, we moved into our first Colorado home (as adults). It was a "Spec Home" -- a brand new home which had been commissioned by another buyer. There was no landscaping in the back yard; and it was graded improperly, leaving a giant lake in the middle whenever there was any precipitation. The first time the tub in the guest bath was used on Christmas Eve, a missing solder joint in the soffit over the kitchen yielded a downpour onto the stove. The house had that new house smell, and I loved it, despite the surprises.

Slowly, we began to connect more to the community around us. It was more necessary than it had been in California or Ohio; something about having children made me need to make friends. Raising children in isolation was a challenge. Never before had I needed validation in the way I did as a new parent. I joined several mothers' groups in our area, and made a handful of good friends. I connected with two particular moms because their husbands worked with Erick.

One of these friends was really into health food. She was the kind of person who just when I thought I understood what she was doing, she was doing something new. When I first met her, she was baking fresh bread every week. It was absolutely heavenly, and made from fresh wheat berries that she ground in a mill in her home. We would buy a loaf here and there as her daughter was selling bread to make money to go to Disneyland with her step dancing group. She also coordinated a local food co-op through the Tucson Cooperative Warehouse, so I saw her very regularly. Eventually, I had to know how to make the bread myself.

I went to her house to learn to make bread the same day Everett had his first MMR vaccination. Before this day, he loved her and her kids. That day, he cried and fussed the whole time we were there. I kept wondering what happened to my sweet baby to make him so upset and scared. I ended up having to leave early to see if he would settle down for a nap. Things would not be the same from that day forward.

My baby was fussy. Erick called him "Little Ceasar." I was exhausted and lived for naptime. Through La Leche League, I would find Dr. William Sears' The Fussy Baby Book, and the chapter on Mother Burnout would be my salvation. The empathy I found in those pages would lead me to want to read every book Dr. Sears wrote, and much of the La Leche League Bibliography (where I first learned of Dr. Sears).

In the meantime, the advice there provided important coping mechanisms and the comfort of knowing I wasn't alone. There were other babies out there -- High Needs Babies -- who would be upset if their hands got dirty, or if they were overwhelmed by Wal-Mart, or if they were blinded stepping out into the sun without sunglasses, or if there was a slight breeze. I made close friends of mothers in similar positions. And it seemed they were everywhere.

After the MMR vaccination, he wasn't just more sensitive, he was constantly sick, after never having been sick. A mom who formula-fed her daughter actually remarked that she didn't see the benefit in breastfeeding since my son was constantly sick. He was sick for six months straight with nine different illnesses. We were constantly going to the doctor.

I was afraid to go anywhere after he caught rotavirus, which he had at 13 months of age for nearly four weeks straight. I have never seen so much vomit and diarrhea come out of one human being, and this particular human only weighed about 19 pounds. It would be this experience, when the on-call nurse told me that I was saving his life through breastfeeding him (most infants with rotavirus cannot digest formula or cow milk), that would convince me to continue to nurse him until he weaned himself. The nurse at the doctor's office, in response to my wondering where he would have picked up rotavirus, said, "It could have been anywhere -- even a shopping cart handle."

Again, I turned to Dr. Sears for help. I devoured his Family Nutrition Book -- the recommendations within largely agreed with what the Kaiser Permanente dietician had taught me two years earlier, with some important exceptions. Sears, in addition to recommending a diet very low in fat, high in grains and lean protein, would also recommend soy foods and very little sugar. I followed Dr. Sears' dietary recommendations to the letter.

Five months' worth of Clorox wipes and hand sanitizer later, I wrote to my local La Leche League Leader and asked what could be causing his frequent illness? "Perhaps a food allergy, like an allergy to dairy, eggs, corn, soy or wheat," was the reply. There it was. Again. Food as the Evil Villain.

My breadmaking friend lent me her copy of Is This Your Child? by Doris Rapp, MD, and the 2.5-inch thick tome convinced me it was time to entertain the idea of food allergies a little more seriously. So then, I bought Jonathan Brostoff's Food Allergies and Food Intolerances, and I was then convinced enough (Brostoff used citations) to do a food elimination trial. After reading a couple more books on the topic, I was a veritable expert. 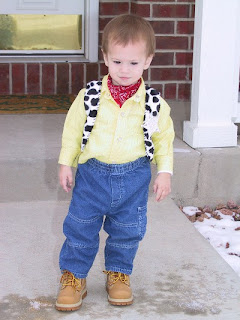 Things did get dramatically better for Everett when we eliminated dairy at eighteen months of age. His sensitivities diminished greatly, and he stopped getting sick so easily. We replaced dairy with Dr. Sears' pet food, soy. Erick's mom gave me a copy of Nourishing Traditions by Sally Fallon around the time Everett was two years old. I read all the chapter introductions at that point, especially because she covered the topic of food allergies, but the cookbook contained a lot of ideas I considered strange and certainly lethal, if not plain disgusting (eating organ meat, making homemade stock, soaking legumes and grains, drinking raw milk, and, GASP! eating saturated fat). So, I would not reopen the cookbook for another three years (despite the fact that my own mother looked through it and said, "Wow! A cookbook with REAL FOOD in it! This is like the food my Grandma Edith would make!"). I guess I didn't consider it that strange, because around the same time, my food-savvy friend lent me a copy, so she had at least had a passing interest in it.

Nonetheless, we were eating fairly whole foods, and I was cooking most of the time. Things would become better enough that we would decide to have another baby.
Posted by Amy Lewark at 11:04 PM