The staff of life, Part 1

Nothing smells quite as good as bread baking in the oven. I just had a delicious slice of homemade bread, made from wheatberries I ground myself, kind of as an experiment, but also as a reminder. 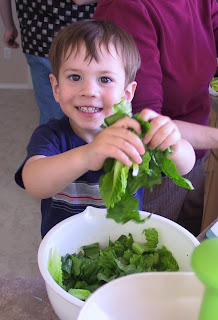 Back when my life was all diapers, playdates and naps, I first got caught up in the whole health food craze. Craze is really the best word for it; you don't have to go far on the internet or in the health food store to hear illogical ideas about which wholesome food is going to put your life in jeopardy next. Even before that, though, Kaiser had taught me about avoiding refined flour and sugar, so I was always out the outlook for a good loaf of bread which didn't contain white flour.

So when the opportunity presented itself to learn how to make bread from wheat in its purest form, I was all ears. My initial attempts to make bread yielded either flat or crumbly loaves. It was so frustrating. I borrowed a hand-crank grain mill from my mother-in-law, and I could grind about a half cup of flour in 5 minutes (I think -- it's been a while). Eventually, my entire operation would radically advance in technology with an electric grain mill and high-capacity mixer, allowing me to make five loaves of bread beginning from the grinding of the grain to their exit from the oven. I would make five loaves of bread once a week, and sometimes some of those loaves would become cinnamon rolls or pizza. Many times it was hard for us to not devour the first loaf right out of the oven.

The benefits of using freshly ground flour include the following:

1) Reduced cost. After the initial investment in equipment (of course), the cost for the wheat is about 27 cents per loaf, and a 50 lb bag of wheat yields about 83 loaves of bread. One pound of wheatberries yields about 4.5 cups of flour, and it takes 10-12 cups of flour to make 5 loaves of bread. These calculations are based on $22.12 for a 50 pound back of wheat, not including shipping.

2) Increased nutrition. Most of the nutritional benefits of eating wheat are from the germ, which is stripped from the grain in industrial milling because the germ oil goes rancid rapidly. The germ contains the full complex of B-vitamins, but according to the woman who taught me (and multiple internet sources), 90% of the nutrition has oxidized and been broken down within 72 hours of milling.

3) Reduced toxins. Have you ever read the label on a loaf of bread at the grocery store? I cannot even find a loaf of bread at my closest local grocery store, Safeway, which does not contain azodicarbonamide. In fact, even the breads baked in-house contain it because it is part of a dough conditioner that is put directly into the flour they use at the store. When I first discovered this, nearly eight years ago, there was very little information about it on the internet, except that it was an industrial foaming agent used in the manufacturing of plastics (like baby food jar seals), and had been banned in the United Kingdom. It is now banned for use in Europe and Australia.

So, I happily made my own bread, which contained just freshly ground wheatberries, water, yeast, honey, sea salt, Vitamin C and canola oil. We ate it at pretty much every meal. Grilled cheese sandwiches were an almost daily staple. Everett seemed able to tolerate cheese, even though milk and yogurt gave him digestive trouble.

In the early part of my pregnancy, I was very good about making bread weekly. Then, I developed sciatica, and it had been weeks, or perhaps even months, since I had made bread. We were eating out more and more, and during one trip to the chiropractor in Denver, we ate at my favorite restaurant (wide spaghetti and meatballs), and Everett and I both got a terrible case of food poisoning, which lasted nearly a week. I had been seeing a specialist during my pregnancy because I had polyhydramnios, which turned out not to be a result of a structural abnormality in the baby (thank goodness). After that week of food poisoning, however, I started losing amniotic fluid at a very steady rate.

I was placed on bedrest for a week at 30 weeks of pregnancy, and had visits to the maternal fetal specialist twice a week to monitor my amniotic fluid levels. I was told to drink at least 96 ounces of water per day, as well, and doing so didn't really seem to work, so I switched to an electrolyte beverage, and that did seem to work, with respect to the amniotic fluid. However, at 37 weeks, my blood pressure elevated again, and I was put on bedrest for that week, at the end of which, I had labor induced.

During one of my trips to the specialist, I had a friend watch Everett. She took him to McDonald's and got him some milk with his Happy Meal. When I came to pick him up, she was holding him in her lap, and he was crying in her lap. She explained that he just randomly became afraid in the Playland, and refused to play in there, crying and screaming. It was very much unlike him, and she was a close friend and neighbor who we saw very often, so he was comfortable with her. I took him home, and he was strange the whole evening. I actually had a high school friend come visit from out of town with her daughter, and he was totally bouncing off the walls (typically he was a pretty calm kid, though he had anxiety, he was not high energy). The entire evening he was loud, violent, his pupils were fully dilated, and his cheeks were bright red. I could not get him to listen to me or calm down at all. It must have made quite an impression on my friend (or my reaction to him did, because I really wasn't sure what to do), because I didn't hear from her again for several years. It was amazing to me that just drinking milk could cause him to have that kind of reaction. It had to have been the milk that caused the reaction; we ate at McDonald's at least once a week at that time, and had never had that kind of reaction before. That was my reasoning at the time, anyway.

In fact, before we eliminated milk from his diet, besides frequent illness I did have trouble getting him to acknowledge me, even though he was calm. He would kind of zone out and have a far away look in his eyes. Also, he frequently had bright red cheeks, and slept fitfully, waking if I wasn't right there next to him, and when he woke, he usually did so crying. He always sweat when he slept, leaving a moist spot where he lay his head.

After that episode at McDonald's, I was very concerned about him. I had him evaluated by the school district, and he was classified as having auditory, tactile, vestibular, oral, and visual sensory integration disorder. At 27 months of age, he knew all of his letter sounds, could count past 30. At that time, nine years ago, kids that young weren't getting Asperger's diagnoses (according to our family physician), but the school district Autism Team was entertaining the possibility. They came to see him at his gymnastics class and during a playdate, and ruled out Asperger's. Apparently, he was too social (even though it was difficult to get him to look me in the eye). According to the speech therapist, he had the vocabulary and speech of a seven year old, and she could see nothing wrong in that respect. However, she did suggest that we try removing gluten from his diet.

Okay, here it was again... gluten being a potential problem. But, I made bread every week, and according to traditional and historical wisdom, it was the staff of life! How could it be hurting our health? I would wait until absolutely necessary to make such a change. Instead, I would focus on eliminating all food chemicals from our diet after reading the book Fed Up with Food Intolerance by Sue Dengate (see also The Feingold Association). 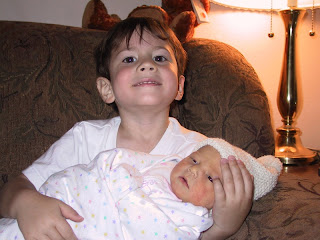 Absolutely necessary came sooner than I thought it would. Lucy was born, and her reflux was worse than Everett's. It was not manageable with Mylicon (simethicone). I was already on a mostly dairy-free diet, but just even having a taste of dairy caused her to projectile vomit after nursing, and choke in the night. Soy would be a problem for her as well. I would try a trial without gluten, just for myself, for a couple of weeks.

The first time I had gluten, not only did Lucy's reflux return (she didn't even spit up once during the day when I avoided casein, soy and gluten), but my hands were achy, and I was so exhausted for the next 48 hours. Also, I would get pain in my right kidney, much like I had toward the end of my pregnancy with Lucy. So, there it was. I had to avoid gluten.

It was a lot easier to avoid gluten for Everett now that Lucy and I had such immediate and devastating side effects. The benefits that we saw from eliminating dairy with him just got better. His attention span increased, he was calmer, the wet spot from him sweating in the bed disappeared, and he stopped gagging at every meal. Many of his sensory integration issues (tactile, oral, auditory, vestibular, and visual) would disappear on a gluten-free, casein-free and salicylate (food-additive)-free diet.

Which of course, begged the question, WHY?!
Posted by Amy Lewark at 1:07 PM