I am so excited.

If you're not a photography nerd, you might not appreciate this quite as much as I do, but here it goes.

I have had a DSLR since 2004, when my daughter was born. And, there's this particular lens I have wanted (the Canon EF-S 50mm f/1.4 prime lens) since February 2005. Well, in my fit of craziness this weekend, I bought it. At the last minute, I was tempted to get one of the more wide-angle lenses (this or this 28mm lens), as I thought they might be more useful for landscapes and indoor candid shots (since the APS-C format of my camera's sensor makes it equivalent to a 80mm lens), but this lens was repeatedly mentioned as a lens photographers using Canon DSLRs trust.

I didn't jump in right away and click "Add to Cart." I watched about 10 YouTube videos reviewing it and read reviews on it and other lenses, first. Just to make sure it was going to be all I had hoped.


I don't use the same DSLR (the original Canon Digital Rebel) I bought back in 2004, anymore. Canon chose not to update its software for Windows 7, and I now have Windows 8, anyway. I recently got a new camera (a Canon 7D), because I had the credit card rewards points to get exactly what I wanted. It's way more camera than I am capable of using, yet, but I am enjoying the challenge of it. I had the idea that I would use the old camera in conjunction with our telescope for some astrophotography.

I have a friend who is a photographer give me a short lesson in our downtown area, to help me get familiar with how to use the camera. I had a lot of fun walking around, snapping pictures in different modes. He even helped me take a picture in full manual mode, and even though I have owned a DSLR for nine years, I had never accomplished that before. 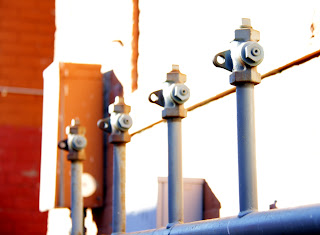 Now, I just need to get a feeling for how to edit the photos with GIMP, though the step up in camera is yielding better photos than what I had before.

Last week, we were in Omaha for the VEX Robotics National Championship, and I appointed myself team videographer. To my surprise (well, to everyone's surprise, as they ended up being ranked 15th in the world), our team won the Programming Skills section of the tournament, and I just happened to find them when they were making their attempts at the Skills Challenges. Each team had three attempts at either Robot Skills (driving the robot using a controller) or Programming Skills (using programs for autonomous control of the robot). I caught the boys doing their second of three attempts, during which the robot became unbalanced and tipped (not something I had seen it do before). But on the third try, their robot successfully scored 140 points by placing bean bags in the goal troughs. The top five teams were able to have two more attempts the following day, and they scored 150 points, securing their National Championship.

The arena was quite dark, and the long, wide, telephoto lens I have (Canon EF-S 18-200 f/3.5-5.6) was okay, but I had to bump up the ISO pretty high (which means more digital "noise"), and my aperture was wide open, and it was nearly impossible to take any stills without blur. So, I was pretty excited to see that the prime (fixed length) lens I had been coveting for so many years was especially recommended for low-light conditions where a flash can't be used. Perfect. It seems like I am going to be capturing images in exactly that sort of environment for some time to come, and the lightweight nature of it will be welcome. In the world of lenses, it is pretty inexpensive, too.

Since our team won the Programming Skills portion of the tournament, I had to get a good video of the portion of the awards ceremony where they received their fancy-schmancy trophy, and that proved a little difficult, because by the time we got over to the side of the arena where the ceremony was happening, there weren't a lot of seats left. That left me pretty high up in the stands, and while the emcee was certain to say that we should not be shy and go down to take pictures, well, I am pretty shy.

Anyway, that night Everett and I decided to stay up and make a video, melding the robot during its championship run with the boys receiving their award, and this is what we created:


We had to learn the video software (Sony Movie Studio Platinum 12.0) on the fly, as neither of us had done much video editing before. The biggest challenge was that I had taken two photos during the filming (the camera is funny that it has that capability), which caused a pause in the movie. So, we decided we would capitalize on that, and make the shot freeze like a picture. Now, I know that it is really easy to extract a digital still from the video (at lower resolution, but still HD quality), so I probably won't take photos while I am filming with the camera. Even though we had some bumps (related to my slowness of brain and his quick-clicking fingers), we decided that we thoroughly enjoyed collaborating on the project, and hope to do more video editing together in the future.

So, anyway, the whole point of getting the camera was not only to capture our family memories, but also develop a portfolio of sorts of subjects from which I can paint during the winter. So, to that end, I've been going through all my photos from years past, doing some minimal editing (since I don't know how to do very much yet).

I have a lot of work ahead of me, but it doesn't feel like work.

Am I the only one in the world who was asked to say "Onomatopoeia" rather than "Cheese" when being photographed as a child?
Posted by Amy Lewark at 5:25 PM 1 comment:

An old friend recently asked me why I haven't been blogging.

Well, I've been a bit depressed since the holidays, so that's why.

I've had an internal struggle with how much of myself I want to share in public, and how I wish to spend my time.

I've been wrestling with whether or not I'm even comfortable with how I feel about anything, and how much of my struggle is okay to make visible to my children, since they're around me all the time. I am not a good actor; I wear my heart on my sleeve. So, I'm sure they've picked up on my melancholia.* It's for this reason I've never been a fan of the idea that homeschooling is the answer for everyone, and even though I wince a little when people say "I couldn't do that," I simultaneously wonder if I'm making a good choice.

February is always hard for me, and thank goodness it is over. I decided this year I would leap into February and hope for the best, but my birthday (very early in the month) hadn't even arrived before something awful happened. And, it didn't even happen to me, but to people who are very dear to me.

Last February was terrible, too, with implications for quite a few of my friends and family. And so I feel a bit like a bad luck charm, but I know it has nothing to do with me at all.

But anyway, it has me pondering various aspects of my existence and rearranging my priorities.

Life just seems too short to spend time reading about how blogger A is disrespectful to his readers and blogger B needs to go screw herself, or how eating a little bit of sugar is going to cause us all to rot from the inside out. I kind of wish more people would decide that it's not worth wasting our precious hours giving these actions and ideas any support. Feeding that type of energy absolutely will rot us from the inside out.

I post all this in the interest of transparency. I don't get a lot of hits on my blog, but I have enough that I would hate anyone to come away thinking I totally have my poo-poo together, because I don't. I'm thoroughly human.

Two words (for anyone who has seen So I Married An Axe Murderer): Thera Pee.

For me, this will take the form of art, and at the very least a small, if not permanent, hiatus from health discussion groups (I think -- I have an ancestor with the surname Fickel, so that's my excuse). Here is my first watercolor painting in twenty-four years or so (using 29-year old watercolors): 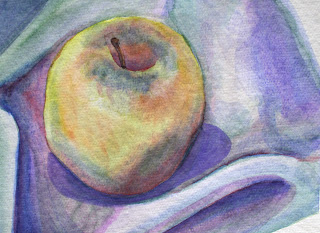 *Another word for "melancholia" is "lugubriousness" which makes me giggle a little bit, and thus defeats the purpose. :)
Posted by Amy Lewark at 6:55 PM 6 comments: