Longing for the familiar

Back in 2001, I hadn't babysat, held a baby, or maybe even seen one for about a decade. And now, here I was, fresh out of a job dealing with technical equipment, volatile chemicals, and scientific jargon, caring for my own.

I tried attending a couple of La Leche League (LLL) meetings, but my local group was led by several homeschooling women, all nursing toddlers. One was even nursing her preschooler, and though they were kind and welcoming and did not project any sort of judgment, that early on in my nursing relationship, I found the ideas of breastfeeding a non-infant and homeschooling foreign. Scary, even.

Everett's reflux continued. It was the source of much interrupted sleep. He slept on a wedge in a playpen/bassinet next to my bed. Even if he didn't wake up wanting to nurse, I frequently woke up worried that he had rolled to the bottom of the wedge or that he had stopped breathing. Ironically (or not), my coworker who had given birth a month before me had a parallel experience with her son: trouble initiating breastfeeding, oversupply, reflux and apnea issues. Her son even required an apnea machine, a machine that would alert her to lengthened episodes of non-breathing, for sleep. I could talk to her on the phone, but trying to get together was difficult for either of us, with babies who did not like to travel (she lived 20 miles away), and chronic sleep deprivation.

I can't remember why, but I had called the local Medela representative, and, as many new and lonely mothers do, shared my experience with reflux. The spitting up was much less if Everett took a bottle rather than nursing. I would get a clue to the cause of this when he was around three months, when his diapers suddenly had a foul odor (unusual for solely breastfed babies), and a strange olive green color.

As it turned out, this particular Medela representative had a child who had apnea and reflux as an infant. When we left the hospital with Everett after his sleep study, the doctor (who had angered Erick) said that if the reflux was not better by 3 or 4 months, surgery could be done to tighten the top sphincter on the stomach. The daughter of this Medela representative had that surgery, and the woman shared with me the difficulties that had arisen because of it. Her then six year old daughter was unable to burp or even vomit, resulting in severe discomfort. She advised me to simply give Everett a drop of Mylicon about 5 minutes into each feeding to help all the gas bubbles conglomerate into a single one to help with his reflux.

After researching the safety of simethicone (Mylicon), this advice would end up costing me a lot of money on generic simethicone, but saving me a lot of time in laundry, and easing Everett's pain tremendously. At that point in my life, short on sleep and support, what I needed most was a pill to make everything better, and that's what Mylicon provided.

The information given to me on my call to La Leche League was overwhelming. Nurse more often. Finish the first side first before moving to the next side. Prop the baby up while he is sleeping. Burp him religiously. Try burping in many positions. Express some milk before putting him to the breast. Try nursing in different positions (including laying on my side in bed and draping the baby over me so gravity was not aiding let-down). And finally, the information that undermined my trust in these lactation experts: try an elimination diet.

I tried all the other reflux management techniques LLL had suggested, and they were exhausting. Eventually, over the course of months, and in combination with the simethicone drops, they would serve to more equalize my supply with his demand. My cessation of pumping would also help. Also, I learned to pay attention to his cues better, and ignore the clock. Like my daughter would be three years later, he was very sleepy for the first three months, and did not give many hunger cues. I had attributed this to all the drugs I had during childbirth, but I did not have narcotics when I was in labor with my daughter, and she still experienced this time of mostly sleep. This was amplified when Everett had his two- and four-month vaccinations, which gave him a fever and made him sleep for twenty-four hours straight. Try as I might, I had great difficulty waking him to nurse, and it was such an endeavor that nursing every 3 to 4 hours worked just fine for me. After three months, though, he was awake more often, and more likely to want to nurse more often than every 3 to 4 hours.

We had a follow-up from the sleep study with a gastroenterologist around 4 months of age. By coincidence, Everett had not passed a stool for several weeks, and I was concerned. This gastroenterologist said that it was normal for a breastfed baby to go as long as 28 days without passing a stool, which eased my mind.

Over time I would learn just how important it was to nurse "early and often." I would learn that the upper limit of a woman's milk supply was determined by the amount she nursed in the first five days after the baby's birth. My breastfeeding experience in those first five days was not at all natural, but my sessions with the surrogate baby (breast pump) apparently drove the upper limit of my supply up plenty. Supply was never an issue.

I would also learn that what is stored in the breast is foremilk, the "skim" part of the breastmilk. It is high in lactose and low in fat. The longer between nursing sessions, the more foremilk will be present in the breast. This foremilk is much harder to digest than the rich, fatty hindmilk which is made on demand after the foremilk in each breast is exhausted. Considering that an infant's stomach is about the size of his fist, and I was expressing about five fluid ounces per side during a pumping session, it's unlikely Everett was getting much hindmilk during that period of time. And that is how the foul-smelling green stools happened, ladies and gentlemen. 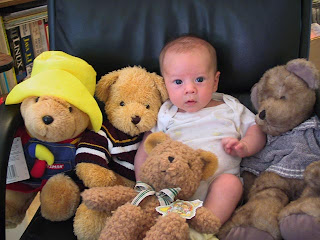 My mind kept drifting to the suggestion of food allergies (I would later learn these are called intolerances), with the most likely one being dairy. Really? I thrived on dairy. I was not a water-drinker; I washed everything down with a glass of milk. Running out of milk in college was the most likely reason I would request a ride to the grocery store from a friend. I attributed my lack of cavities to my milk consumption. How could such a health promoting food be the cause of so many problems for my son and I? This made no sense to me at all. I felt that viewing foods as trouble was a road fraught with peril, as is the wise and common response of many people who first hear the recommendation for a food elimination trial.

I had landed right on Mars, complete with little men who pooped green, cried to communicate, and didn't honor my body's need to sleep like a log for eight hours uninterrupted. Health-promoting foods were potentially danger-ridden. This was all strange for Erick, too, and in watching how quickly everything was changing, how quickly Everett was growing, we decided to move back to Colorado and share the experience with people who would care -- our family. We would leave Mars and go back to the familiar.
Posted by Amy Lewark at 10:03 PM